Obama, Be A Ghostbuster!

*This post is part of the Steinbeck Classics Circuit Tour hosted by Rebecca Reid. This tour began on August 15th and will end on the 26th, celebrating all that is Steinbeckian throughout its duration!
﻿﻿ 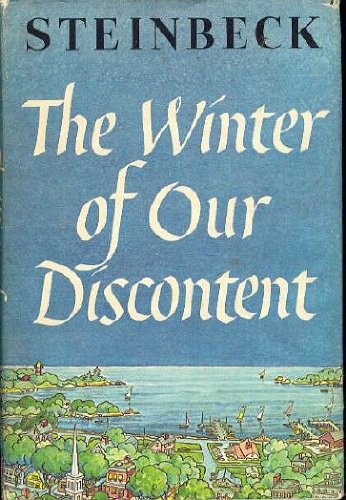 John Steinbeck's last novel was The Winter of Our Discontent, a novel which begins with the following statement: "Readers seeking to identify the fictional people and places here described would do better to inspect their own communities and search for their own hearts, for this book is a large part of America today." Isn't it uncanny that he still is correct in this day and age?  ﻿﻿﻿﻿﻿﻿﻿﻿﻿﻿﻿﻿
But let us begin with the basics-Ethan Allen Hawley toils each day as a mere grocery store clerk in the very town where members of his family were once prominent aristocrats. Hawley has been robbed of the aristocratic lifestyle by both his father's ill-fated investments and his own fiscal follies. The slightly impoverished man now resides with his family of four in the old Hawley house that houses artifacts reflecting the family's previous grandeur. The great margin between failure and success causes there to be many comparisons between Hawley and his forefathers on the parts of both Hawley's mind and the individuals around him. Eventually, these comparisons and the great expectations forged by them pervade his sense of honesty and righteousness, causing the innocent and kind Ethan to become a ruthless, success-obsessed machine. When banker Mr. Baker (love the alliteration of his name and profession!) mentions that the only land usable for a lucrative airport in New Baytown is in the ownership of Danny Taylor, a drunk who was Hawley's best friend in childhood, our main character hatches up a scheme fatal for Danny and excellent for Hawley when it ultimately gives him the piece of profitable property. And this is only the surface-Ethan also reports the existence of his ever-benevolent boss, Marullo, as an illegal immigrant to the federal authorities. And all this occurs because of expectations sprouting from these constant comparisons between Hawley and his forefathers....it's almost like they are haunting him, yes?...they're influencing him even when dead just like-ghosts. Yep. Ethan is in fact being haunted by ghosts. Not the kind reminiscent of Marley in A Christmas Carol with a translucent body and terrifying voice, but a ghost that only exists through influence. The dead and successful ancestors of Ethan haunt our main character with an impeccable model of what, according to both him and his peers, he should be in life.
However, the aforementioned haunting does not have to exist. You see, it all has to do with what occurs within Ethan's mind-even if others are consistently making the comparison and setting the expectation, Hawley cannot be haunted if he doesn't make the comparison and set the expectation in his own mind. What Hawley does wrong is both dwell on the comparison and feel that he is a complete disappointment for not achieving that expectation of success; this is what causes him to attempt to expel the disappointment with such atrocious actions. A way by which to stop making these comparisons is realizing that Ethan Allen Hawley both does not face the same circumstances and is not the same person as any of his ancestors; it is therefore purely illogical to compare Ethan and the previous Hawleys.
So nowadays, the United States finds itself at a particularly challenging point. With unemployment at an uncomfortable rate, the national debt rising to excessive levels, and Congress having a hissy-fit over almost every piece of legislation that comes under its nose, the outlook is not so positive for America retaining world domination. But all in all, America's situation is not all that different from that of Hawley.  Current America is significantly less great than Past America, and it is this difference that causes both Past America's mind of those of its fellows to make comparisons between the two. The level of success Past America experienced is now expected of Current America, just like the level of success Ethan's ancestors experienced is now expected of Ethan. Therefore, we are letting Past America with all of its success be a ghost that haunt us.
However, Ethan Allen Hauley is not the same person as any of his ancestors and now faces different circumstances than any of them once did. Present America and Past America are the same way: Was President Eisenhower on Facebook? I don't think so. Did Teddy Roosevelt have to deal with Muslim extremists? Not that I know of. We must respect our age and know that Present America calls for different government attitudes, different philosophies in policy, and different manners by which to get itself back on the track to glory. Just because FDR raised the debt level to fix a recession, for example, does not mean that we should do the same nowadays.
America needs an entire government's worth of ghostbusters indeed.

I'll return follows and comments, all of you.
Leave your twitter name and I'll follow that thing too.
But the real reason I want your comments, I'll now confide,
is so I can see you utilizing the first ammendment.With pride.

Who is the Teenage Philosopher?

So You Want to Be a Stalker?

What is the Teenage Philosopher Reading?

What a Wonderful Blogosphere!